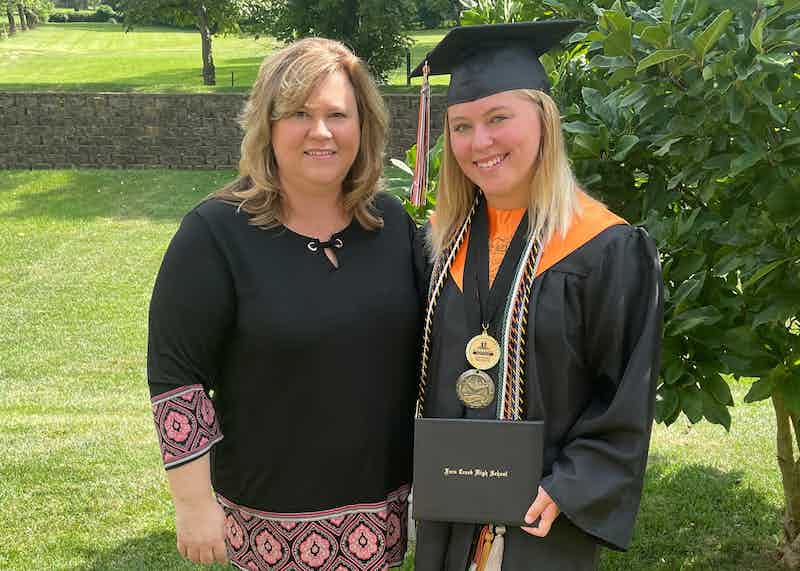 When Melissa Crittenden watched her daughter – valedictorian at Fern Creek High and college-bound – walk across the stage at her high school graduation in May 2022, her second chance at life felt like it had come full circle.

Eighteen years removed from a near-death experience in the recovery room at Baptist Health Louisville, Melissa felt thankful all over again as she thought about her fully blossomed second-born child taking the symbolic step into adulthood and just how close she was to never seeing Erin’s actual first steps.

When Melissa gave birth to Erin in 2004, a uterine rupture and emergency C-section led to a massive bleed that nearly took Melissa’s life. Melissa’s doctor saved a non-responsive Erin upon delivery and sewed Melissa back up, but complications from the trauma led to additional bleeding, and Melissa eventually crashed hours after giving birth.

Melissa didn’t know any of this until about six weeks after she left the hospital.

“My family sat me down and they told me what happened because I didn’t remember any of it,” Melissa said. “I remember waking up in a lot of pain. They said, ‘You died. They had to get you back. There was a lot of praying.’ ”

Melissa almost bled to death. Her hemoglobin dropped all the way down to three (the normal range is between 12-15 for a female) and her vitals flatlined.

“They had to do CPR on me,” Melissa later learned. “They said they were squeezing blood into me as fast as they could get it.”

The quick actions of the medical staff at Baptist Health and the blood donated by volunteer blood donors literally brought Melissa back to life. She received about 12 to 13 transfusions between the uterine rupture and the complications.

Melissa’s experience, while traumatic, is not uncommon. According to the America’s Blood Centers, one in 83 infant deliveries require a blood transfusion. In addition to this experience, Melissa’s late father also needed regular transfusions after he was diagnosed in 2017 with myelofibrosis, a rare type of blood cancer in which the bone marrow is replaced by fibrous scar tissue.

“I’ve been on the other side of it, and I know what it feels like to reap the reward of it,” Melissa said. “If people aren’t giving, people can die.”

Melissa has been a donor most of her adult life. Her husband, Brent, worked with the local fire department and hosts frequent blood drives. Experiencing the firsthand need for blood, it has inspired Melissa to be a chairperson for KBC. She helps set up drives for her company, QK4, an engineering and planning firm, and recruits lifesaving donors.

“I want somebody else’s dad to make it,” Melissa said. “It takes 30-45 minutes. Not only will it make you feel better, but it could also be you on the table one day or someone that means a lot to you.”

The heroic act of others has given Melissa the opportunity to experience one of life’s greatest joys: seeing her daughter grow up. Erin will attend Centre College in Danville, Kentucky, in the fall of 2022 to study biology.

“When you have people outside your home, people at church and school talk about what a great leader she is, that’s just the biggest compliment you can get,” Melissa said. “She has always done really well in school, but she has had such an impact on the people around her. That’s the thing that makes you most proud.”