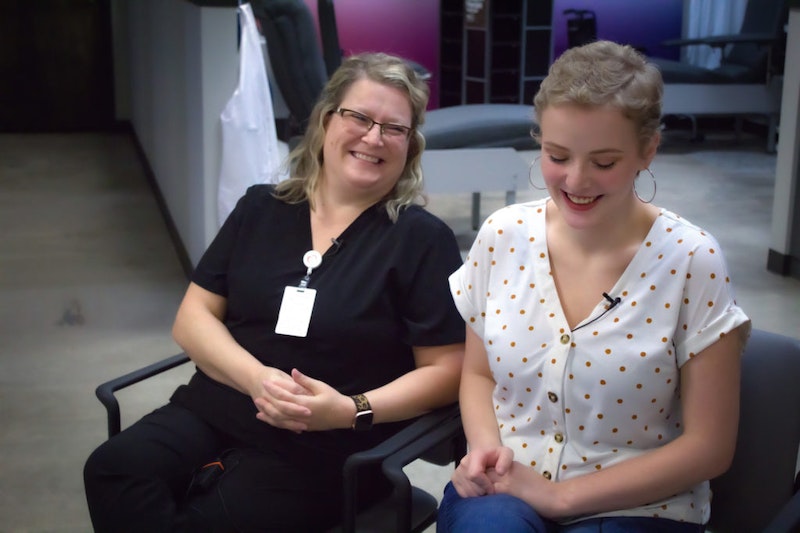 Sheena Saylor knows she is a bit of a “helicopter mom.” She knows she worries a bit too much, and she has tried to let her oldest daughter, Megan, have a little space.

But Megan can forgive her mom for her sometimes-pestering maternal instincts this spring because they may have saved her life.

Megan, at 18 years old, had just moved out of the house in the spring of 2022 after graduating high school a semester early, so Sheena was cautious of her daughter flying the nest. Not to mention, as a certified nursing assistant and current Kentucky Blood Center phlebotomist, it is in Sheena’s nature to have the health and well-being of others on her mind.

So, in late May, when Sheena picked up Megan to go shopping with her other daughter and noticed her daughter’s gums were bleeding throughout the family outing, it was a red flag. Megan, who describes herself as the polar opposite of a hypochondriac, chalked it up to some aggressive dental care and didn’t think anything of it – even with blue patches and red dots starting to form around her ankles.

When Megan woke up the next morning with giant bruises covering her body from head to toe and sent her mom pictures that afternoon, Sheena picked up the phone and told her to get to the hospital as soon as possible.

“I started to panic of course,” Sheena said. “I’m thinking she’s got some kind of infection in her bloodstream. I told her to get to the hospital, and that if she didn’t go, I was going to get off work and go take her myself.”

Megan went on her own and Sheena joined her at Baptist Health Corbin. Blood tests revealed Megan’s platelet count – the cell fragments in your blood that form clots and prevent bleeding – was at 2,000 per microliter of blood. It is supposed to be between 150,000 to 450,000.

“They told me on the way there that if I would have bumped my head or even gotten a paper cut that I could have had a brain bleed or bled out from it because my platelet count was so low,” Megan said.

After some initial leukemia concerns, Megan was diagnosed with immune thrombocytopenic purpura, a blood disorder often caused by infections where the immune system mistakenly attacks platelets. She had an adverse reaction to a platelet transfusion, so she received two immune globulin intravenous transfusions over three days to get her platelet count back to normal.

Megan will always have ITP. It may cause issues again at some point, or she may never deal with it again. But she will need weekly check-ups and labs for the rest of her life to monitor the condition.

The blood supply will always be on the Saylors’ minds because Megan could need a transfusion at any moment. A single IGIv transfusion comes from the serum of thousands of blood donors.

Sheena had, coincidentally, just started working at KBC when Megan was diagnosed with ITP. Given Sheena’s medical background, donating blood was always important to the Saylors, and both Sheena and Megan had given before, but every time Sheena draws blood from a donor at the Tri-County Donor Center in Corbin, she thinks of her daughter and understands just how important that bag is to somebody in the state.

The seriousness of the diagnosis has really resonated with the usually stoic Megan. What was initially a “get-out-of-class card” when she first donated blood in high school now has special meaning.

“There are people that are in those hospital beds who need 30 minutes of your time to survive,” Megan said. “It’s not just a needle in your arm; that’s saving someone else’s life.”