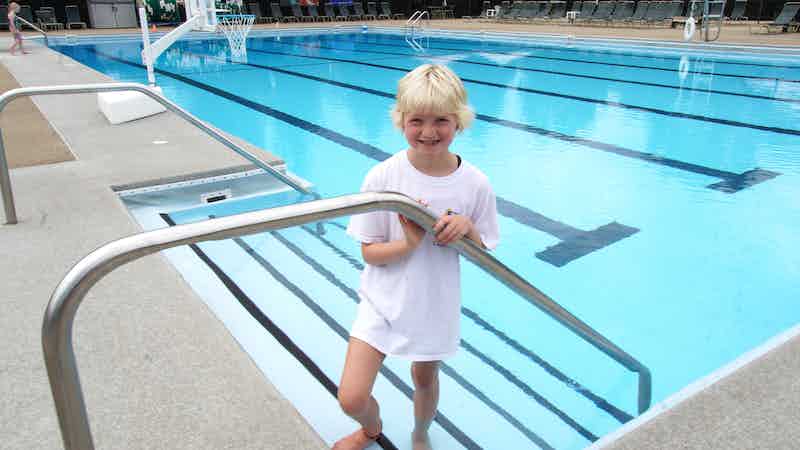 The moment was so surreal for Margo Greeman, so disorienting, that even when the words came out of the doctor’s mouth, she didn’t believe it. She asked the doctor to write on a piece of paper what she thought she just heard.

“I’m still thinking we’re going home,” Margo remembers from Aug. 26, 2021, the day inside a room at UK Hospital that turned her family’s life upside down. “And he spells out ‘l-y-m …”

Margo’s 8-year-old daughter – the blonde-hair, blue-eyed little girl who loves to swim – had diffuse large B-cell lymphoma, a type of fast-growing non-Hodgkin’s lymphoma where the body makes abnormal B lymphocytes.

That was the first of 72 straight days for Mallary in the hospital. After weeks of intense and excruciating stomach pain, the Greemans now knew what was going on with Mallary, but there was little comfort in the diagnosis.

The next two and a half months were brutal for Mallary. Five rounds of weeklong chemotherapy. Test after test. Feeding tubes and fevers. The isolation of the COVID pandemic in a hospital where she couldn’t see her brother or sister.

“She was kind of terrified, but then it was kind of more like, ‘When I can I go home?’ ” Margo recalled of how her daughter handled the news. “When you’re dealing with a kid, you’re like, ‘They’re going to have to give you all this medicine and they’ll have to put an access port in.’ You have to explain that. … It’s just so much. When you first find out, they’re throwing all this information at you. It’s so wildly overwhelming. It’s enough for you and your husband to digest. It’s enough as well-educated adults to feel like you should have somewhat of a clue, and then to try to simplify that and talk to your 8-year-old is tough.”

And then there was the blood that Mallary required from the toxic but lifesaving chemotherapy. Imagine all these frightening things happening all around you, your hair falling out, your small frame whittling down to nothing, and then they bring in bags of blood.

Mallary was scared, so they covered the blood bag with a teddy bear they called Medi Teddy. She received four transfusions of whole blood and another transfusion of platelets.

Medi Teddy did her job. Mallary got the blood she needed, the chemo fought back the cancer, and Mallary went home two and a half months later. She is now in remission and enjoying third grade, the first normal school year of her life after missing most of second grade due to her treatment and the two prior years dealing with the COVID pandemic.

“I was shocked the first time they said she would need blood because I didn’t relate the two,” Margo said. “That wasn’t something I would have ever pieced together.”

In reality, 25% of the blood supply aids patients undergoing cancer treatments. With more than one million people diagnosed with cancer every year, the demand for blood has never been greater.

Having been exposed to the need firsthand, Margo has started giving blood again. She used to do it religiously, but she fell out of the habit when she had her three kids.

“There are way too many kids up on that floor in the west wing to not be doing this again,” Margo said. “I sit there and think about Mallary when she got her blood. It’s like the easiest thing in the world to do when you think about these little kids who are suffering like they are and have to endure this terrible experience.”

Margo’s husband, Josh, and sisters have joined her. So too has her brother and her neighbor. She’s hoping more will join the effort and help people like Mallary so they can swim in the summer, go to school in the fall and be kids again.

“It doesn’t matter if you have money, if you have an education, any kind of background that you have, you probably have known somebody who needs it,” Margo said. “It’s free. … You’re just showing up. You are just donating your time, and yes, a little piece of you, but my God, what an amazing gift that you can give to a tiny person.”