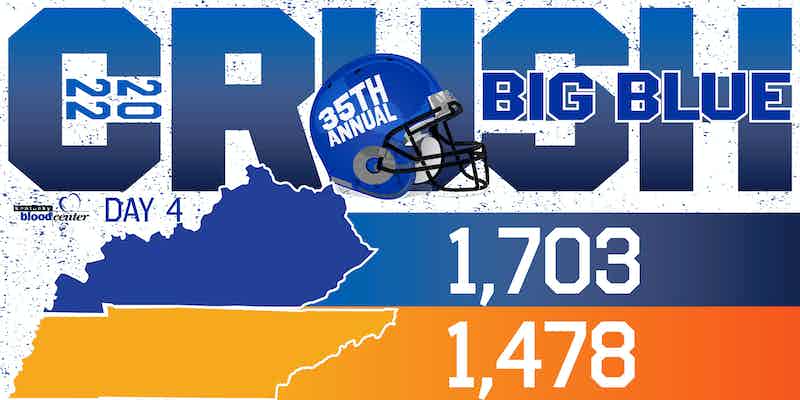 LEXINGTON, Ky. – Kentucky fans showed up in big numbers for a second straight day as they try to reclaim the Big Blue Crush trophy in the 35th edition of the annual competition vs. Knoxville’s MEDIC Regional Blood Center.

On Thursday, 441 Kentuckians gave blood at Kentucky Blood Center mobile drives and donor centers to bring the four-day running total to 1,703 total donors. After Tennessee’s 389 showing Thursday, the Volunteers stand at 1,478 donors heading into the final day of the annual blood drive, which aims to boost the blood supply in both states before the Thanksgiving holiday.

“We are riding a really good wave of momentum heading into the final day of Crush, but crazier things have happened,” said Mandy Brajuha, VP for external relations. “The final day always yields the biggest numbers, and we can’t afford to rest now. Let’s finish this one strong, Big Blue Nation. Let’s turn a really good week into a great one and give our hospitals the boost they need.”

Kentucky, which leads the series 19-14-1, is seeking its third victory over the last four years.

As satisfying as a win would be for KBC and its donors, stocking the shelves full of blood before the holiday next week – when transfusions typically go up and donations go down – is the goal of the event.

KBC has not been immune to the national blood shortage and has navigated much of the last two and a half years with an urgent-to-critical supply (a day’s supply or less of blood).

One in four people will need a blood transfusion during their lifetime. Blood provided by KBC to its 70-plus hospitals in Kentucky is used for surgeries, to battle diseases such as cancer and sickle cell disease, to assist mothers during premature births, to save lives during traumas, and more.

Donors hoping to clinch a victory for Kentucky on Friday can donate at any of KBC’s eight donor centers spread across six cities (Lexington, Louisville, Corbin, Frankfort, Pikeville and Somerset). Donor centers will be open from 9 a.m. to 6 p.m. KBC will also feature select mobile drives, including on the University of Kentucky campus at Buell Armory from 10 a.m. to 5 p.m. Additional mobile drives can be found at kybloodcenter.org/event/big-blue-crush-2022. 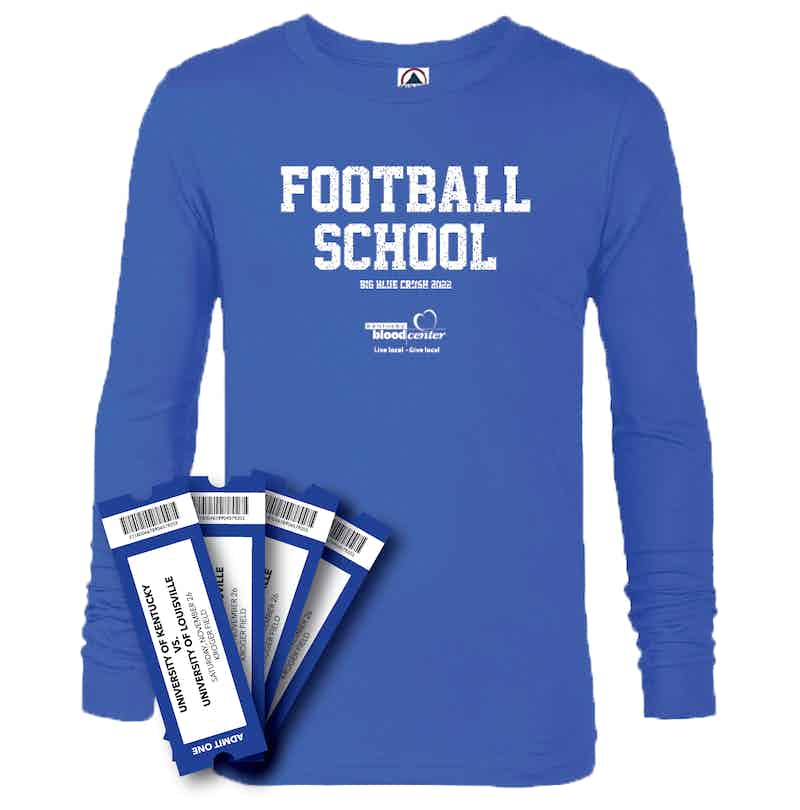 Donors can schedule an appointment at kybloodcenter.org or call 800.775.2522. Appointments are highly encouraged during Big Blue Crush.

Blood donors must be at least 17 years old (16 with parental consent), weigh at least 110 pounds, be in general good health, show a photo I.D. and meet additional requirements. Sixteen-year-old donors must have a signed parental permission slip, which can be found at kybloodcenter.org.

Find a Drive Near You

Celebrating 55 years of saving lives in Kentucky, KBC is the largest independent, full-service, nonprofit blood center in Kentucky. Licensed by the FDA, KBC’s sole purpose is to collect, process and distribute blood for patients in Kentucky. KBC provides services in 90 Kentucky counties and has donor centers in Lexington, Louisville, Frankfort, Pikeville, Somerset and the Tri-County area.