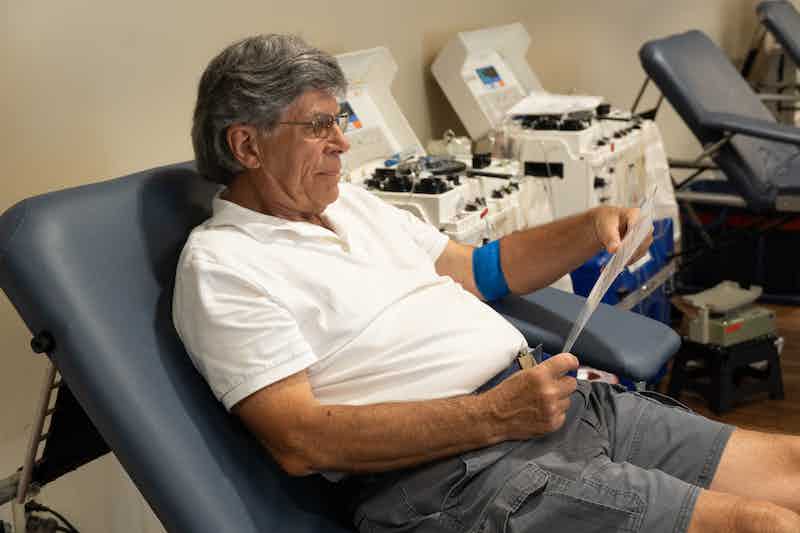 Hundreds of donations later, the reason why Joe Swelnis started down a lifetime of servant leadership was rather simple.

He was 21 years old, just starting out in his career and didn’t know many people at his new place of employment. Within the first few months on the job, a blood drive happened at his work, and a lot of the people Joe was trying to get to know were donating.

“It didn’t take much to persuade me,” Joe said. “Everyone else was doing it, so I said, ‘Sure, I’ll do it.’ I had never given blood before, but I enjoyed it and really have never stopped.”

At Kentucky Blood Center alone, Joe has made nearly 275 donations, the equivalent of 34 gallons of blood, many of them at the Madison County Richmond Community Drive. The lives he has helped save over the years is nearly a thousand.

But it was a life he couldn’t ultimately save that has undoubtedly strengthened his passion for giving blood.

His first wife, Lucinda, developed lung cancer in the late 1980s. Between the removal of part of her lung, radiation, and chemotherapy, her journey with cancer was brutal and required multiple blood transfusions.

Unfortunately, Joe lost Lucinda to cancer after it spread to her spine about a year after her diagnosis. Cindy, as everyone called her, received the transfusions she needed, but her death has been a constant reminder to Joe to continue donating even after all these years, especially now when 25% of the blood supply is used by patients battling cancer.

“There is no other way to secure a supply of blood,” Joe said. “Modern medical science has not found a way to synthesize human blood. We just can’t do it yet, and maybe never.”

As many lives Joe has saved with donations, he has saved countless others with his fervor for encouraging others. He has become a bit of a pitchman for blood banks with his friends and connections.

“I’m just one person,” Joe said. “I can only do just one pint every two months (every 56 days). It’s like a drop of water in a pond. When you add it up, the need is a lot greater. For people who need blood, if I or other people don’t give, then the blood’s not there.”

Joe is aware of the shortage of blood that has plagued the nation for much of the COVID-19 pandemic. It worries him because he knows the majority of donations come from an older demographic.

“I won’t be able to give blood forever obviously, and no one my age can,” said Joe, 75 years old. “I feel fairly young for my age, but I know people who have had to stop donating because they just can’t do it anymore.”

His question to the younger generation: Will you step up?

“They feel that someone else will take care of it and that they don’t have to worry about it because it will always be there,” Joe said. “I think that’s probably the biggest misconception. If I have the opportunity to talk to someone, I say, ’If you need a pint of blood when you’re in a car accident and you have to have surgery, where do you think it’s going to come from?’ ”