LEXINGTON, Ky. – Kelsey Michael, a 26-year-old pediatric intensive care unit nurse at the University of Kentucky Hospital, is the lucky winner of an all-expenses-paid vacation for two to Jamaica, the first of two grand prizes Kentucky Blood Center is awarding this summer to donors who give blood during the Summer Getaway Giveaway.

Michael, who first donated when she was 18 years old at a drive on the UK’s campus, was presented the six-day, five-night trip to the Excellence Oyster Bay – an all-inclusive resort in Montego Bay, Jamaica – on Thursday at KBC’s Beaumont headquarters. 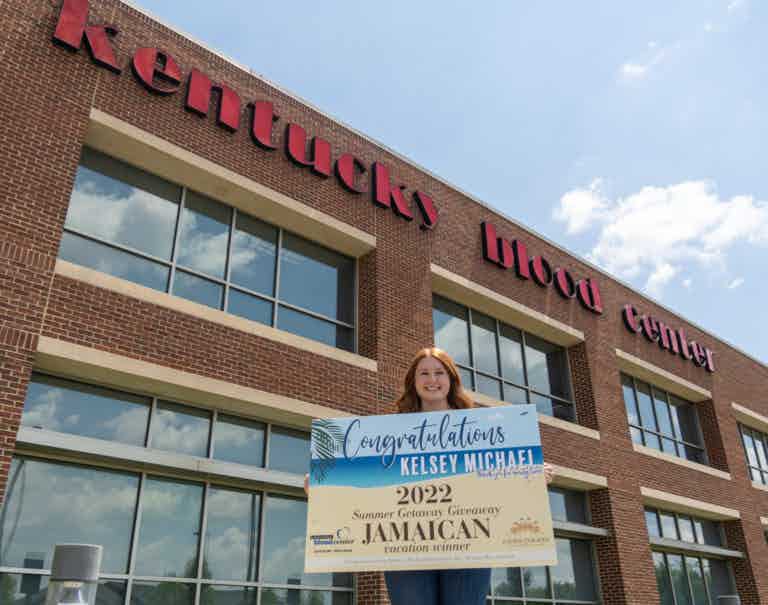 “Giving blood has always been easy for me just knowing how often we need it,” Michael said. “I have always kind of thought in my head that every time I give blood (to a pediatric patient), I am going to donate blood. I know it’s not medically possible to do that, but it’s one of those things that motivates me to do it is that mind set of, ‘Give blood to a kid, donate some myself.’ I have seen countless lives saved because of blood donation, so I just want to do my part.”

Michael, a Northern Kentucky native, has been a loyal donor with KBC throughout her education at UK and now as a nurse in Lexington. She has donated whole blood and platelets consistently since 2014.

Michael received the winning call from Mandy Brajuha, VP for external relations for KBC, shortly after the July Fourth holiday. The conversation was both relieving and surprising after Michael received a voicemail from Brajuha asking her to call KBC regarding a recent donation.

“I honestly didn’t believe her when she first said something,” Michael said. “I forgot that they do these kinds of things for donating blood because I never did it for more than just donating blooding and knowing the importance of it. It was just kind of an added bonus to doing good for others.”

Michael, who is currently balancing work and school to become a pediatric nurse practitioner, is planning to take a fellow co-worker and classmate. They are currently looking at dates in the winter when they can both take time off work and school is out of session.

“It will be really nice to be off work and relax and not have to worry about it with some of the things we see and deal with every day,” Michael said. “Work was really generous to give us permission to take the time off. This is something we are both looking forward to.”

The Jamaican vacation is the first of two prizes in the 2022 Summer Getaway Giveaway. KBC is once again offering its summer vehicle giveaway this year, providing all donors 18 and older who register between May 23 and Sept. 10 the chance to win a 2022 Toyota RAV4. KBC began giving away brand-new Toyota vehicles to boost summer blood donations in 2008. This marks the second straight summer the non-profit organization has given away two grand prizes.

Summer is traditionally a difficult time for blood centers. Transfusions generally rise in the summer months while donations decline. After two years of diminishing donations because of COVID-19 complications, this summer has put a considerable strain on the already low blood supply. KBC is currently battling a critical blood shortage as transfusions have taken an uptick in July and donations have reached their normal summer slump.

Bill Reed, CEO of KBC, is calling on all donors to help KBC dig out of the two-year hole and help local patients.

“We are thrilled to announce Kelsey as the first of two winners for our 2022 Summer Getaway Giveaway,” Reed said. “It was special to find out that someone who literally saves young lives every day and has been with us since she was in college was our winner. We want to thank Kelsey for her persistence in helping others, and we hope it will inspire more donors to come out this summer and potentially win a new car.”

Kentucky Blood Center recently opened new donor centers in the Tri-County area (Corbin) and Frankfort. With eight donor centers in six cities and nearly 2,000 mobile drives a year, KBC is better equipped than ever to serve local patients in Kentucky, but donations are needed.

Celebrating nearly 55 years of saving lives in Kentucky, KBC is the largest independent, full-service, nonprofit blood center in Kentucky. Licensed by the FDA, KBC’s sole purpose is to collect, process, and distribute blood for patients in Kentucky. KBC provides services in 90 Kentucky counties and has donor centers in Lexington, Louisville, Pikeville, and Somerset.

Ready to save lives?