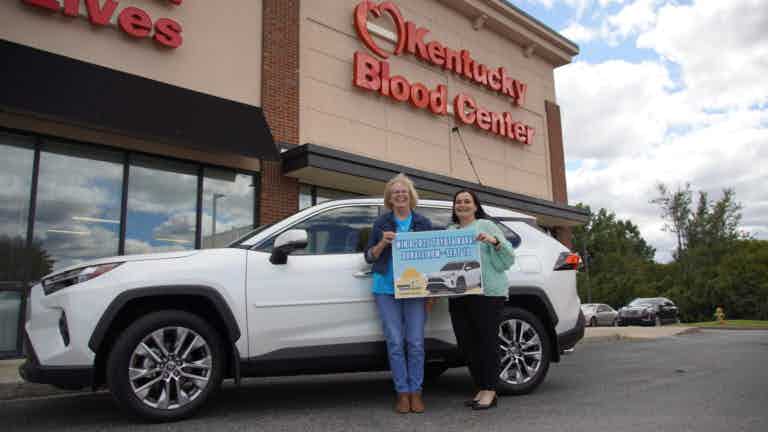 LOUISVILLE, Ky. – Sharon Jones, a 63-year-old nurse from Louisville, was presented the keys to a 2022 Toyota RAV4 on Wednesday at the Kentucky Blood Center Hillview location as the grand-prize winner of the Summer Getaway Giveaway.

Jones, who has worked with individuals with developmental and intellectual disabilities for 30 years, is a longtime blood donor. She began donating with Kentucky Blood Center this year after discovering the Hillview location just a few miles from her house in Shepherdsville.

She has since made four donations this year, the last of which – on Aug. 30 at the Hillview Donor Center – was the winning registration, less than two weeks before the Summer Getaway Giveaway ended. Individuals 18 and older who registered to give blood with KBC between May 23 and Sept. 10 were eligible. More than 23,000 entries were recorded.

Jones began donating when she was 18, but the impact it makes hit home for her just a few years ago when her husband needed several units of blood following emergency surgery for a collapsed lung. It was discovered during surgery that Jones’ husband had significant internal bleeding.

“It became a little more personal,” Jones said. “I’ve also needed blood and my dad did a long time ago. There’s nobody that can really say they don’t know anybody who has needed blood. Someone always needs it.”

Although Jones never donated to win something like a vehicle, winning the 2.5 liter, four-cylinder RAV4 is a welcomed thank you that will replace her current 18-year-old truck.

“When you donate, it’s going to go to somebody who needs it,” Jones said. “It doesn’t take very long time to do. You’re taking an hour out of your time every two months, and most of the time when people are getting blood, it’s a lifesaving issue. Just knowing that someone got your blood, that’s enough satisfaction in itself for me They’re so low on blood, it’s something that everybody ought to think about.”

Jones is the second of two winners for the 2022 Summer Getaway Giveaway. Kelsey Michael, a 26-year-old pediatric intensive care unit nurse at the University of Kentucky Hospital, won an all-expenses-paid trip for two to Jamaica in July. This marks the second straight summer KBC has given away two prizes.

“Our drawings for our summer promotions are 100% random, but to award two people in one year who have dedicated their lives to helping others is really special,” said Bill Reed, CEO of KBC. “Thank you to both Sharon and Kelsey for their commitment to saving lives, and thank you to everyone who helped put blood on the shelves this summer. We hope their stories will continue to inspire donors to give the rest of the year.”

Summer is traditionally a difficult time for blood centers. Transfusions generally rise in the summer months while donations decline. After two years of diminishing donations because of COVID-19 complications, this summer put a considerable strain on the already low blood supply. To motivate donors to come in and roll up their sleeves, KBC began giving away brand-new Toyota vehicles in 2008.

Donors can schedule an appointment at kybloodcenter.org or call 800.775.2522. Appointments are preferred, but walk-ins are welcome.

Donate at any of our eight donor centers or more than 2,000 mobile drives: